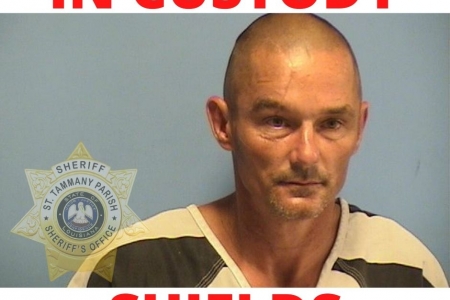 A suspicious person call resulted in an arrest Monday (May 16) night after alert St. Tammany Parish Sheriff’s deputies realized the man was giving a false name and in fact had warrants for his arrests and was also being sought by a nearby agency after he cut off his ankle monitoring device.

Shortly after 11 p.m. Monday, STPSO patrol deputies were dispatched to a residence on Nellie Drive near Slidell after the homeowner found a man sleeping in her backyard.

The individual provided deputies with a fake name, but they soon learned the man was in fact Jason Shields (DOB 1/10/75), an individual who was wanted on warrants for failing to appear in court on bank fraud charges.

The deputies on scene learned that Shields was also wanted by Misdemeanor Probation and Parole and Slidell Police after he cut off his ankle monitoring device.

STPSO deputies took Shields into custody. He is being booked into the St. Tammany Parish Correctional Center on the above mentioned warrants in addition to one count each of Trespassing and Resisting an Officer by Providing a False Name.

“I applaud the deputies who responded to this call,” Sheriff Randy Smith. “Because of their training and alertness they were able to quickly realize this individual was not being truthful, and successfully prevented his efforts to avoid arrest.”