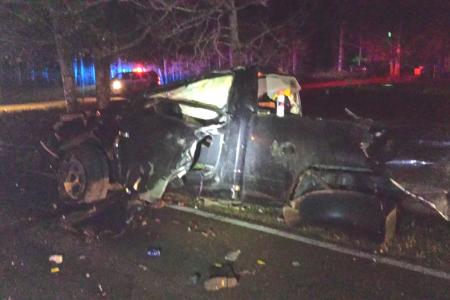 Last night, at approximately 8:30, the Sheriff's Office received a call reporting an overturned vehicle on Archie Singletary Rd. near Ridgewood Dr. in the Pearl River area. The caller also reported that a white male had been ejected from the vehicle.
Sheriff's office traffic deputies, including one of our crash reconstructionists, responded to the scene.  The Sheriff's office Crime Lab was also called to the scene for processing.

The initial on-scene assessment indicates that a Dodge pickup truck was traveling north on Archie Singletary Rd. when it left the roadway in a curve.  After striking a culvert, the truck vaulted and landed back on the roadway.  The driver was ejected from the vehicle during the vault.  It is believed that the driver was not wearing a seatbelt, and speed is considered to be a factor in the crash.

Fire District #7 and Acadian Ambulance personnel attempted lifesaving efforts at the scene, but they were unable to resuscitate the man.

Toxicology tests are pending with the St. Tammany Parish Coroner's office.  The man's address was listed as being near the crash site off Archie Singletary Rd.