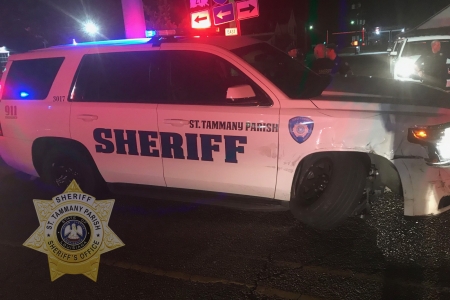 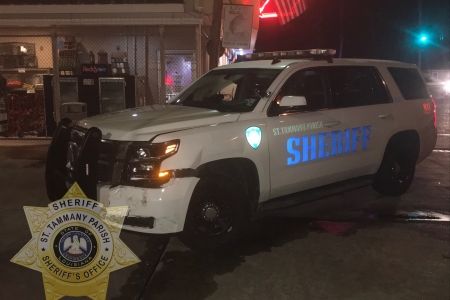 Two teenagers are in custody following a vehicle pursuit that started after they were caught burglarizing vehicles in a Covington-area subdivision early Sunday (August 30) morning.

St. Tammany Parish deputies were dispatched to the Timberlane subdivision shortly before 2 a.m. Sunday morning after a resident observed two individuals attempting to burglarize his vehicle.

Responding deputies located the perpetrators’ pickup truck exiting the subdivision and attempted a traffic stop. The vehicle failed to stop, and deputies gave chase. The pickup truck continued into Madisonville at speeds in excess of 100 miles per hour. Near the intersection of Main Street and Highway 22, the vehicle struck two St. Tammany Parish patrol units. The passenger of the truck, a 16-year-old male from Hammond, was removed from the vehicle. He was ultimately charged with L.R.S. 14:62 Simple Burglary, L.R.S. 14:69.1 Illegal Possession of Stolen Firearms and L.R.S. 14:967 Possession of Schedule II CDS and released to the custody of his mother on a custodial release.

The driver, Mark Fridge (DOB 6/17/2002) on Picayune, continued to attempt to flee and fought with deputies as they attempted to restrain him, punching one deputy in the face, dragging two on the ground and kicking others. Once secured, Fridge was transported to a local-area hospital, where is being treated for injuries his sustained in the scuffle with deputies. The deputies did not require medical treatment.

Upon his release from the hospital, Fridge will be booked into the St. Tammany Parish Jail on the following charges:

Deputies located a bottle of prescription drugs stolen from a vehicle in the Timberlane subdivision inside the truck, and three firearms, also all believed to be stolen, in the bed of the truck.

Sheriff Randy Smith urges residents throughout St. Tammany Parish to use these arrests as a reminder to always lock their vehicle doors and to call 911 anytime they observe suspicious activity.

“Vehicle burglaries are crimes of opportunity,” Sheriff Smith said.  “Even if you are parked in your own driveway or just running into a store for a quick minute, it is imperative to always lock your vehicle doors and to never leave purses or valuables in sight.”