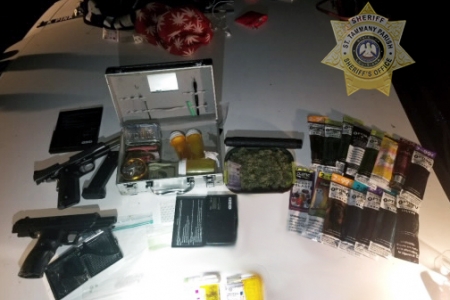 Shortly after 10:30 p.m. on Wednesday (August 8), a St. Tammany Parish criminal patrol deputy was patrolling a Covington-area neighborhood located off Harrison Avenue, when he observed a subject peek his head up and out of the rear, open bed of a parked pickup truck.  The deputy stopped to investigate and as he approached the parked truck, he observed two males and a female inside of the bed of the truck, who had been smoking marijuana.

A subsequent investigation led to the discovery and seizure of two firearms (one having an obliterated serial number), and varying amounts of marijuana, LSD, Ecstasy, Xanax, Adderall, and drug paraphernalia, including two electronic scales, and a small amount of cash.

All three subjects were arrested and booked into the St. Tammany Parish Jail on the following charges: