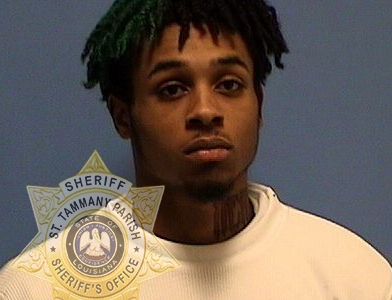 UPDATE: James Salvant (DOB 1/23/2000) surrendered himself at the St. Tammany Parish Jail Wednesday night (November 20) and was taken into custody and booked on one count of L.R.S. 14:94 Illegal Use of a Firearm and four counts of L.R.S. 14:37.4 Aggravated Assault with a Firearm.

The St. Tammany Parish Sheriff’s Office is looking for a Slidell man in connection with a shooting that occurred Thursday evening near Slidell.

Shortly after 7:45 p.m. Thursday (Nov. 14), the St. Tammany Parish Sheriff’s Office responded to the area of Coast Boulevard in Slidell in reference to reports of gunshots being heard.

A subject in what is believed to be a silver or white Toyota Corolla fired upon a second vehicle, which was occupied at the time by four individuals, as the two vehicle drove down Coast Boulevard.  The suspect vehicle then fled the area.

After being fired upon, the driver of the other vehicle also attempted to leave the area but crashed into another vehicle near the intersection of Old Spanish Trail and Coast Boulevard.

No injuries were reported as a result of the gunfire nor the crash.

Friday afternoon, detectives obtained a warrant for the arrest of James Salvant (DOB 1/23/00) in connection with the shooting. Salvant is wanted for one count of L.R.S. 14:94 Illegal Use of a Firearm and four counts of L.R.S. 14:37.4 Aggravated Assault with a Firearm.

Anyone with information about the whereabouts of James Salvant is asked to call the St. Tammany Parish Sheriff’s Officer at (985) 898-2338.