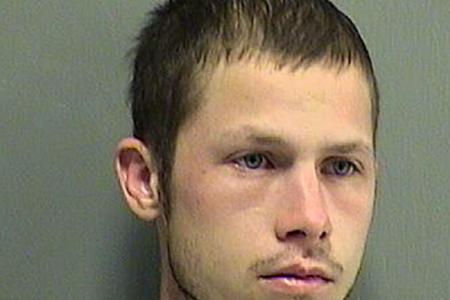 After seeing his picture posted on the St.Tammany Parish Sheriff’s Office Facebook page as one of the individuals wanted for multiple vehicle burglaries in the Slidell area, a Slidell area man turned himself in to authorities Friday afternoon. Detectives are now looking for the other two men who were involved in the crimes.

Detectives obtained surveillance video from Wal-Mart on Natchez Drive, in Slidell, where one of the stolen debit cards was used by two possible suspects, and on January 9, 2015, a message was posted on the St. Tammany Parish Sheriff's Office Facebook page with the images of those subjects.  The posting requested the public’s assistance in identifying them.

On the afternoon of January 9, 2015, Adam Gunnerson (DOB 12/25/1990; 115 Bosworth Street No. 115, Slidell) came to the Slidell Law Enforcement Complex because he saw the Facebook post and recognized himself as being one of the subjects in the photograph.

Gunnerson told detectives that he used his blue, 2007 Toyota Corolla to drop off Alman and Stephenson in the subdivisions so they could burglarize vehicles.

Gunnerson was taken into custody and arrested on more than 20 counts of LRS 14:62 Simple Burglary and LRS14:67.15 Theft of a Firearm(s), as it relates to the vehicle burglaries.

During the investigation, Sheriff’s detectives determined that Gunnerson also committed similar crimes inside the city limits of Slidell, and the detectives notified that agency.

Warrants have been obtained for Alman and Stephenson, and they are currently being sought by law enforcement. It was learned that the two immediately left the state upon being tipped off that the St. Tammany Parish Sherriff’s Office was looking for them, and they were last known to be in the Ocala Fla. area.

Detectives conducted several search warrants in the evening hours of Friday, January 9, 2015, and recovered some of the stolen property.

“Social media has proven to be a very useful tool when it comes to tracking down and identifying criminals,” Sheriff Jack Strain said. “It is a tool that works very well because of the support our agency receives from the citizens in St. Tammany Parish.  Criminals know if they see their photo on Facebook committing a crime, it will not be long before residents turn them into authorities. St. Tammany residents have sent the message time and time again that crime will not be tolerated in our parish.”