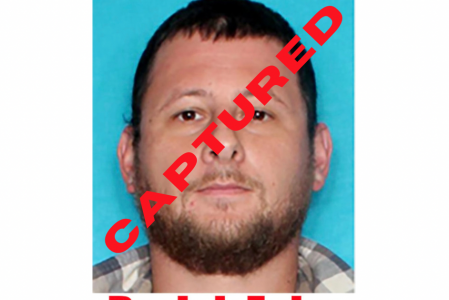 Derick Fehn was located at approximately 8 p.m. Monday (April 18) at a residence in St. Bernard Parish. He was taken into custody and will be booked into the St. Bernard Parish Jail while he awaits extradition  to St. Tammany Parish.

Sheriff Randy Smith would like to thank Sheriff Jimmy Pohlmann and the St. Bernard Parish Sheriff’s Office as well as the US Marshal Service for the assistance they provided to the STPSO detectives in quickly locating an apprehending Fehn.

The St. Tammany Parish Sheriff’s Office is looking for a St. Bernard man, who is wanted on murder charges, following a shooting which occurred Sunday in the Slidell area.

Detectives are asking for the public’s help in locating Derick Joseph Fehn (DOB 12/1/1991).

Shortly after 3 p.m. Sunday (April 17), STPSO deputies were dispatched to the 2000 block of Old Spanish Trail near Slidell in reference to a shooting.

Detectives learned Fehn drove to the area Sunday afternoon after a days-long feud between his significant other and her sister.

As he was approaching the sister’s residence, the sister, the victim and their small child exited the home and walked toward Fehn’s vehicle. At which time, Fehn pulled out a gun and fired upon the three individuals before driving off in what is believed to be a white, newer model Chevrolet pickup truck.

The sister and the child were not injured, but the sister’s 30-year-old boyfriend sustained gunshot wounds. He was transported by medical personnel to an area hospital, where he succumbed to his injuries.

Anyone with information about the whereabouts of Derick Joseph Fehn is asked to contact Sgt. Adam Rudolph at (985) 726-7849.