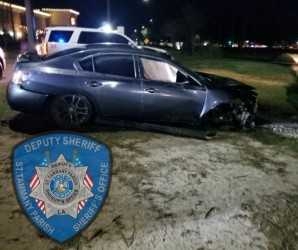 Members of the St. Tammany Parish Sheriff’s Dive Team recovered a stolen vehicle after it crashed into a waterway near Covington Saturday (March 12) night.  The vehicle, a Nissan Maxima, was reported stolen from the Lacombe area earlier in the night.

STPSO deputies were dispatched to the area of Park Place and U.S. Highway 190 at approximately 9:30 p.m. Saturday night after a passerby reported seeing a car crash into a nearby pond. Witnesses described a man they saw fleeing the area after exiting the submerged vehicle and swimming to land.

Using that description, deputies quickly located the driver, Obie Williams (DOB 11/16/2003). Upon apprehending Williams, members of the STPSO Dive Team were called out to recover the vehicle.

At approximately 1 a.m. Sunday morning, during freezing temperatures, Dive Team members recovered the vehicle from the water, and confirmed it was the same vehicle that was reported stolen earlier in the night.

Williams was arrested and booked into the St. Tammany Parish Correctional Facility for Theft of a Motor Vehicle, Hit and Run and Reckless Driving. He was also booked on an open attachment for Contempt of Court.

“I am proud of the swift action by our deputies to apprehend this individual. Once again, we are sending the message that we will not tolerate criminal activity in our community,” Sheriff Smith stated.