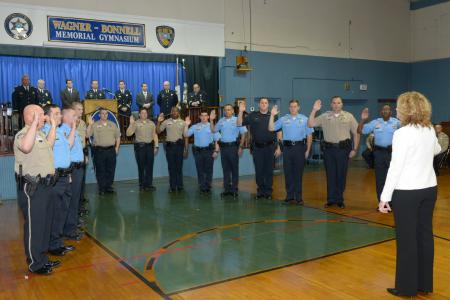 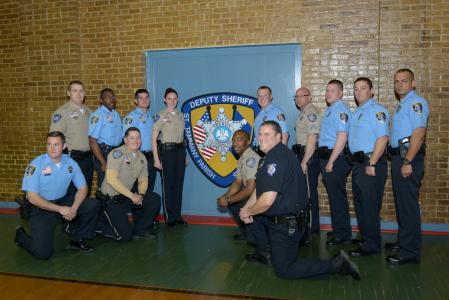 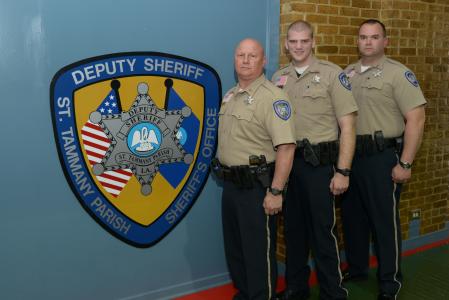 The graduation, which included the Session 19 Day Class and the Session N-8 Night Class, marks the first time since the St. Tammany Parish Sheriff's Office opened its Training Center in 2009 that individuals from other agencies have attended the academy.

"We are very pleased that we were able to include Mandeville and Covington police officers in this academy class.  Anytime we can consolidate functions of government, it is a win-win for everyone involved.  The comradery established between these officers and our deputies was clear to everyone at the ceremony this morning, and they will benefit from this common bond for the rest of their careers.  Our residents benefit, as well, from the cost savings of not sending these department's officers away to be trained," Sheriff Jack Strain said.

"Using the St. Tammany Parish Sheriff's Office POST Academy to certify and train our officers provides us more flexibility for training and the ability to get our officer certified and out on the streets in a more timely manner," Mandeville Police Chief Rick Richard said. "Not only that but it also fosters a better repport and relationship between the different law enforcement agencies in our parish. I congratulate Officer Dondeville in obtaining his P.O.S.T. certification."
"We are proud of these officers for graduating the academy this morning and excelling while doing so.  This will bring us another step closer to our goal of a fully staffed police department," Covington Police Chief Tim Lentz said. "I would also like to thank Sheriff Strain for allowing these officers to attend his POST Academy."

The graduates receive P.O.S.T. Level I certification by the State of Louisiana.

The newly sworn in Louisiana-certified peace officers completed more than 500 hours of academic and physical training, evaluation and testing at the academy.

Chief Danell Gerchow presented the Oath of Office to the graduates.

From the Covington Police Department:

From the Mandeville Police Department:


Four awards were given to the members of each class who performed the best in four categories of instruction: academics, driving, physical fitness, and firearms.

The "Top Cop" award for academics went to Officer Brian Pereira for Session 19 and Deputy Sidney Lejeune for Session N-8.

The "Speed Racer" award for driving went to  for Session 19 Deputy Brandon Landry and Deputy Sean Brady for Session N-8.

The "Gunslinger" award for firearms went to Officer Mark Dugas for Session 19 and Deputy Sean Brady for Session N-8.

Click here to see a video showing some of their training.