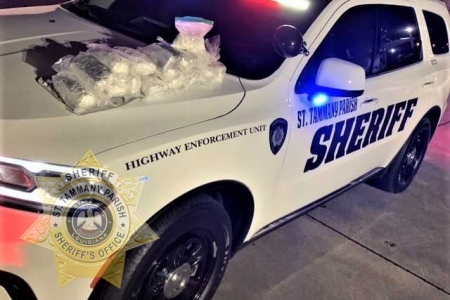 The St. Tammany Parish Sheriff’s Office has arrested a man after he was found transporting a large cache of illegal narcotics through the parish.

Shortly after 9 p.m. Monday (May 9) a deputy with the STPSO Highway Enforcement Unit conducted a traffic stop on a Subaru Legacy which was traveling eastbound Interstate 12.

During the course of the traffic stop, the driver and sole occupant of the vehicle, Guillermo Zepeda (DOB 02-08-1989), admitted to possessing a THC vape pen within the vehicle. The deputy also observed an open package of pills, which was later determined to include a tablet of Diazepam (Valium), in plain view on the center console.

These factors prompted a search of the vehicle, which uncovered 16 pounds of suspected methamphetamine, approximately 9.18 ounces of suspected Alprazolam (Xanax) tablets, and drug paraphernalia.

It was also discovered that Zepeda had discarded a small bag containing approximately 2.9 grams of suspected methamphetamine into the grassy area along the interstate while deputies were searching his vehicle.

Zepeda is believed to be traveling through St. Tammany on his way from Arizona to Florida.

Thank you to members of Homeland Security Investigations who also with this case.