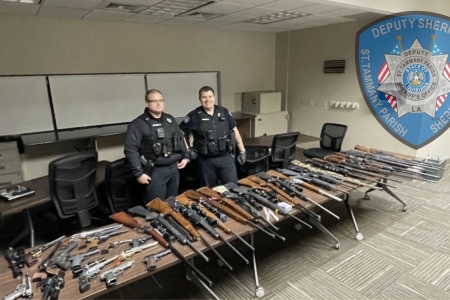 A St. Tammany Parish Sheriff’s Office deputy, patrolling in the 61000 block of Highway 434 in Lacombe, noticed a suspicious vehicle near a storage complex. Upon further investigation, deputies arrested a man for numerous charges and seized 41 guns from the subject’s storage unit.

Late last night, an alert deputy patrolling in the Lacombe area noticed a suspicious vehicle near a storage complex. The deputy got out with the vehicle and discovered a female inside the car sleeping. The female advised the deputies her boyfriend was in his storage unit inside the complex. Deputies then located the male, 37 year old Michael Malone of Covington, Louisiana, in an opened storage unit and observed all of the weapons. Upon investigating further, deputies learned Malone was a convicted felon and had an outstanding warrant for his arrest due to a probation violation. A search warrant was obtained for Malone’s unit and during the search deputies learned there were 41 weapons of various makes and models, small amounts of suspected methamphetamines and marijuana, and drug paraphernalia.

Malone was booked into the St. Tammany Parish Correctional Center.

Sheriff Randy Smith stated, “Anytime a weapon is taken away from the bad guys and off the street, it is a great day. That means those weapons are not out there in the wrong hands where someone could possibly get hurt. This is an awesome job by those hard working and dedicated deputies, who are out there protecting and serving and keeping everyone safe. I am proud to be your Sheriff and we will continue to be vigilant in taking weapons away from criminals, who are not allowed by law to possess them.”