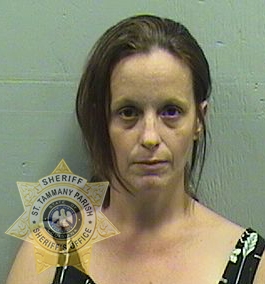 A Slidell-area woman has been arrested after her 11-month-old son was found face down and unresponsive in a bathtub, earlier this month.

Nancy Goodale was arrested Wednesday (Oct. 10) after it was discovered she was under the influence and impaired, when she left her 11-month-old son in a bathtub with the water running, during the early morning hours of Oct. 1.

Goodale told responding deputies she was bathing the baby in an upstairs bathroom at approximately 2 a.m. when she went downstairs to retrieve clothing. She said the child was face-down in the water when she returned minutes later.

Goodale’s boyfriend, who was also present at the residence at the time of the incident, called 911 to report the baby was unresponsive. He immediately started CPR and ultimately the baby regained consciousness before being transported by medical service personnel to a local area hospital.

Medical staff determined the child had also sustained non-accidental injuries consistent with child neglect.  The Department of Children and Family Services (DCFS) was immediately notified and took custody of the child, upon his release from the hospital.  The child was noted to be in good condition.

The subsequent investigation developed the probable cause necessary for a warrant to be obtained on Tuesday (Oct. 9) for Goodale’s arrest.  On Wednesday (Oct. 10) Goodale was located at her Slidell-area residence and taken into custody without incident.

Goodale was transported and subsequently booked into the St. Tammany Parish Jail on one count of L.R.S. 14:93.2.3, Second Degree Cruelty to Juveniles (felony).

The investigation is ongoing and no additional information is available at this time.