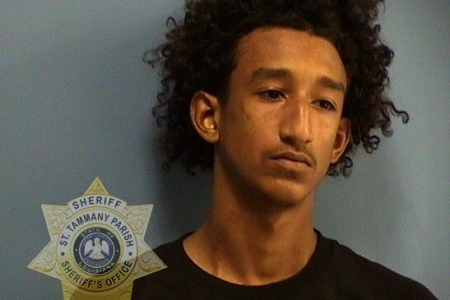 **Update**
Angelo “Lo” Roman Lafitte was taken into custody by STPSO detectives in Slidell Tuesday afternoon without incident. Lafitte will be transported to the St. Tammany Parish Jail, where he will be booked on the charges listed below.
“I applaud the detectives who tirelessly worked this case and successfully took this very dangerous individual off our streets within 48 hours of the crime being reported. Our prayers go out to the victim and his family as he faces a difficult road to recovery,” Sheriff Randy Smith said.  “Violence like this will not be tolerated in St. Tammany Parish and the men and women of the STPSO will continue to work and remain vigilant to see that those who perpetrate violence are arrested.”

A 16-year-old male was struck in the hip and is in guarded condition at an area hospital following the incident.

Lafitte had provided a group of individuals with an address with plans to meet after he and one of them had exchanged threatening messages via social media.

As the group drove down Laurent Road, Lafitte fired multiple shots at the vehicle, one of which struck the victim, who was a passenger in the vehicle.

The driver drove to a nearby residence, at which time, 911 was called and STPSO deputies responded.

Anyone with information about Lafitte’s whereabouts, is asked to call the St. Tammany Parish Sheriff’s Office at (985)898-2338.

***Please note: Booking photo is from an previous arrest in 2017