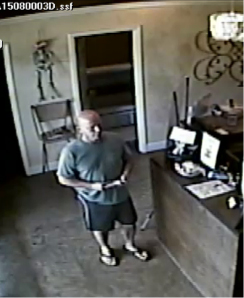 On Oct. 20, a man entered Baja Tans at 1102 North Highway 190 in Covington and began asking questions about spray-on tanning.  The female employees started to explain the process to the male, at which time, he asked if the spray tan would affect his "skin disorder.” The man then lifted his shirt and pulled down his pants and underwear, exposing his genitals to the female employees.  The employees described the subject as a white male, approximately 40 years old, approximately 5’8” with a bald head. He was wearing a green shirt and blue shorts.
The same day, a man matching the same description entered the Private Beach Tanning Salon at 2180 North Causeway Boulevard in Mandeville and began asking questions about the tanning process.  The male then asked an employee if he could show her his tan line, to which she stated he could.
The male then pulled down his shorts.
Upon reviewing the security camera footage of this incident, it was discovered the male appeared to be masturbating behind the counter while conversing with female employee.
If you have information about either of these instances or recognize the man in the photo, please call Detective Matthew Rowley at 985-726-7827.