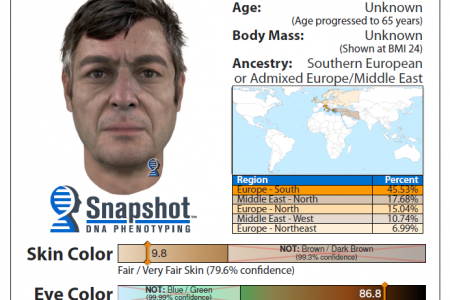 After nearly two months, St. Tammany detectives are still looking for information to help identify a homicide victim. Thanks to advanced DNA testing, authorities are hoping new details about the case, as well as a sketch of the victim, will encourage someone to come forward with information.

Around 7:00 a.m. on Friday, July 29, the St. Tammany Parish Sheriff’s Office was notified by a passerby of a badly decomposed body, which was found on Highway 90, just east of the intersection of Highway 433. An autopsy, conducted by the St. Tammany Parish Coroner’s Office, determined that the body was that of a male who was approximately 5’10” tall and approximately 65 years of age, or older. The cause of death was blunt force trauma to the head. Dr. Charles Preston ruled the manner of death to be a homicide. Due to the level of decomposition, age and race were unable to be determined. The only distinguishable mark was a scar on the victim’s chest from a prior open heart bypass surgery.

For almost two months, detectives have followed several leads, all of which resulted in no positive results. No one has come forward with information, and DNA from the victim has yielded in no matches from any local or national databases. A check of various missing persons has also yielded in no positive matches. The victim’s DNA was sent to a DNA technology lab in Virginia, called Parabon NanoLabs, which specializes in DNA phenotyping. This is a process of predicting physical appearance such as: eye color, hair color, skin color, freckling, and face shape. This test has help us determine that the victim was a white male with fair skin, brown or hazel eyes, and dark brown hair. A sketch was developed by Parabon NanoLabs of what they feel, based on their advanced DNA testing, the victim may look like. Keep in mind, this is a new science and the best we have at this point in time.

Authorities hope the following new details will assist with the investigation:

* The victim was not killed at the location where the body was found. Authorities believe the victim was killed at least 3 days prior to the body being dumped on Highway 90.

* Both of the victim’s arms were dismembered, along with one of his leg’s (just below the knee). The extremities have not been recovered. It is a possibility that the suspect intentionally cut off the limbs in an attempt to hide tattoos or prominent scars.

* Based off of some recovered evidence at the scene on Highway 90, it is believed that the victim, or suspect, may have ties to the Mississippi Gulf Coast. It is also a possibility that the victim may have been homeless or a transient, but this is only an assumption. We have partnered with the FBI and have reached out to numerous local and state law enforcement agencies.

* Not a new fact, but once again, the only distinguishable mark found on the victim’s body was that of a scar on his chest from a prior open heart bypass surgery.

St. Tammany Parish Sheriff Randy Smith said, “The scope of our investigation is much broader than just St. Tammany Parish. This man is somebody’s loved one who has been missing for at least two months. Somebody, somewhere, knows something. We are asking with information to please come forward.”

Anyone with information is asked to contact Detective Timothy Crabtree at 985-898-2338 or call Crimestoppers at 504-822-1111. You can remain anonymous and may be eligible for a cash reward.