Mom Arrested, Cousin Wanted After Juvenile Shoots Himself in Leg 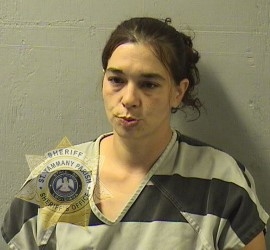 Kimberly Taylor (DOB 5/31/1986) allowed her 16-year-old son to live with his cousin, a convicted felon, at a residence in the Rocket Ranch Trailer Park near Slidell.

The juvenile was at the residence with the cousin, Dane Williams (DOB 12/21/1990), when he accidentally shot himself in the knee shortly before 1:30 a.m. on Thursday.

Taylor, who was living in a separate trailer next door, was alerted after her son was shot. She called 911 before driving him to a local hospital, where he was treated and released. She has been charged with L.R.S. 14:92.2 Improper Supervision of a Minor. She was booked into the St. Tammany Parish Jail, after detectives learned she was knowing allowing her minor child to live with a dangerous felon.

Williams, who is currently on probation, has multiple prior convictions in Louisiana and in other states for a variety of charges, including, accessory after the fact to attempted second degree murder, felony theft and driving under the influence.

Warrants have been issued for his arrest on one count each of L.R.S.  14:95.1 Felon in Possession of a Firearm and L.R.S. 14: 130.1 Obstruction of Justice. Anyone with information about the whereabouts of Dane Williams is asked to contact the St. Tammany Parish Sheriff’s Office at (985) 898-2338. He is believed to be driving a gold Ford F-150 with a Florida license plate.