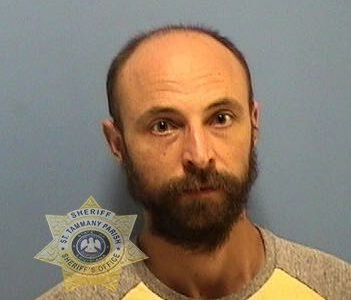 The St. Tammany Parish Sheriff’s Office has arrested a Mississippi man on an attempted first-degree murder charge following an investigation into an incident that occurred involving a Mandeville-area juvenile.

In late August, St. Tammany Parish Sheriff’s detectives began an investigation after an 8-year-old male claimed Jared Davis (DOB  9/27/1982) had attempted to strangle him while at his residence in Mandeville.

The month-long investigation resulted in a warrant being issued for Davis’ arrest.

A warrant was also issued for the arrest of the child’s mother on one count of L.R.S. 14:25 Accessory After the Fact for aiding and abetting Davis after the crime was committed. She was picked up at her Mandeville-area residence on September 25 and booked into the St. Tammany Parish Jail.

Davis was picked up at a family member’s residence in Stone County, Miss., that same day and booked into their jail as a fugitive.

On September 29, Davis was transported to the St. Tammany Parish Jail, where he was booked for one count of L.R.S. 14:27/30 Attempted First-Degree Murder.

The juvenile was placed in the custody of a family member.

Due to the case involving a juvenile, no additional information will be released.

“It is certainly a tragedy anytime a child becomes a victim of domestic violence,” Sheriff Randy Smith said. “Our deputies will continue to work tirelessly to bring those responsible to justice.”