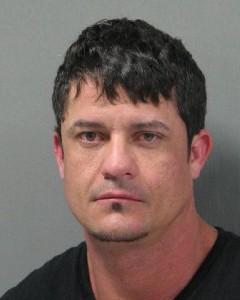 On March 15, 2013, St. Tammany Parish Sheriff’s detectives conducted a traffic stop on a vehicle driven by Joseph Anthony Triguero (09-29-76; 3916 Henican Place, Metairie) on Interstate 10 in Slidell. It was determined that Triguero was transporting a large quantity of illegal narcotics, while working as a DJ/bouncer in Louisiana and Florida.

GBL is a chemical that when ingested by humans is synthesized into GHB (the date rape drug) by the body.

Triguero was arrested for various possession with intent to distribute narcotic violations and booked into the St. Tammany Parish Jail.

After bonding out of jail, Triguero failed to show up for his scheduled court appearance and a warrant was issued for his arrest.

During the month of July 2014, STPSO Narcotics detectives determined that Triguero was residing in Key West, FL. and the Florida Department of Law Enforcement (FDLE) was contacted to assist with locating and capturing Triguero.

On July 17, 2014, FDLE agents arrested Triguero in Key West. At which time, FDLE agents and Key West Police located a large quantity of MDMA, PCP and marijuana in his Florida home.  He was also found to have an outstanding warrant through Miami Dade County for narcotics violations.

Triguero was booked at the Monroe County Jail in Florida on new possession with intent to distribute narcotics charges.

When he bonds out of the Monroe County Jail, Triguero will be transported to the Miami Dade Jail to satisfy the pending narcotics warrant in Miami.

Once that is resolved, he will be transported to the St. Tammany Parish Jail, where he will be booked for failure to appear in court on the following charges, stemming from his March 2013 arrest:

Triguero has an extensive criminal history, including arrests for theft, aggravated burglary, narcotic violations, stalking, extortion, arson and a myriad of other charges.