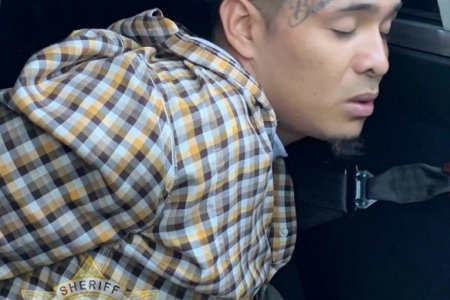 A Florida man who robbed a Mandeville-area gas station this past summer was located Tuesday (November 16) morning by the U.S. Marshal’s Service in Florida and taken into custody.

In June, the St. Tammany Parish Sheriff’s Office posted a BOLO on its social media pages asking for the public’s help in identifying an individual who robbed a Mandeville-area gas station at gunpoint.

The ongoing investigation into the robbery led STPSO detectives to obtain warrants for the arrest of Daniel Martinez (DOB 6-27-1996) of Tampa, Fla., one count each of Armed Robbery and one count of being a Felon in Possession of a Firearm.

Tuesday morning, agents with the U.S. Marshal’s Service located Martinez in Polk County, Fla. He was taken into custody and booked into the Polk County Jail as a fugitive. He was also wanted by Louisiana State Police on unrelated charges.

“We are grateful for the working relationship we have with our federal partners, who assisted us in locating and arresting this individual that made the mistake of coming into our community and committing a crime,” Sheriff Randy Smith said.