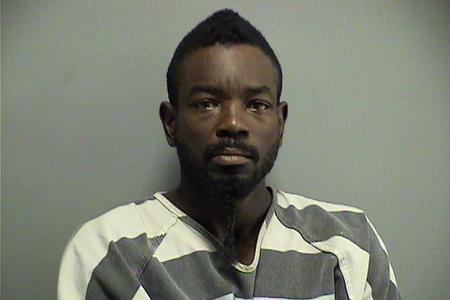 A Trace ranger in Lacombe called 911 yesterday morning after an encounter with Pickens during which Pickens threatened the ranger.  The ranger had been trying to disburse Pickens from a makeshift encampment he constructed under the Bayou Castine bridge (approx. one mile west of Fontainebleau State Park).  When deputies arrived, Pickens had already left the area.

Deputies searched for Pickens throughout the morning, with patrol deputies working areas near the Trace and motorcycle deputies riding the Trace itself.  Just before noon, a parish employee called 911 to report Pickens was near the Koop Drive Trailhead, causing a disturbance.  Traffic and patrol deputies immediately responded to that area and located Pickens on the Trace near Sharp Road.

Deputies found Pickens with a loaded .22 handgun, which had an obliterated serial number, concealed in a bag.  Pickens also had portions of an expired (due to age) ballistic vest attached to his person and the front of his bicycle.

Pickens was arrested without incident at approximately 11:45 a.m.  After questioning, he was booked into the St. Tammany Parish Jail.