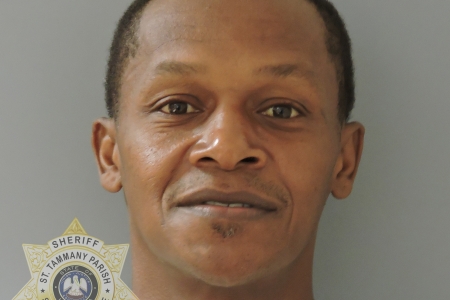 A man recently released from Angola is back behind bars after he broke into a woman’s house while she was sleeping.

St. Tammany Parish Sheriff’s deputies were dispatched to an Alton-area residence, just outside of Pearl River, at approximately 1:30 a.m. Friday (Sept. 28) after a woman called 911 to report there was a man inside her home.

The man was attempting to make entry into her bedroom where she had been sleeping.

The woman told deputies she was awoken by her home security alarm as the man was forcing entry into her residence. He made his way inside the residence toward the bedroom.  The victim was holding the bedroom door shut to prevent the man, who was armed with a knife, from gaining entry, while she was simultaneously on the phone with St. Tammany Sheriff’s dispatchers.

Deputies were on scene within minutes, however the suspect had fled upon hearing the victim had called authorities.

Using surveillance footage from the cameras at the home, deputies located and later identified the suspect as Derrick Cousin (DOB 8/26/1968).  Cousin was taken into custody at a nearby residence, where he had been staying since being released from State custody last month.

Cousin, who was released from Louisiana State Penitentiary at Angola nearly one month ago, had served approximately 20 years of a life sentence for the offenses of forcible rape, first degree robbery and unauthorized entry of an inhabited dwelling.  He was determined to be a violent sexual offender and was required to register as such.

Cousin was booked Friday morning into the St. Tammany Parish Jail on the following charges:

L.RS. 14:60 Aggravated Burglary with a Weapon

“This victim is extremely lucky to be alive after this dangerous criminal received an early release,” said Sheriff Randy Smith.