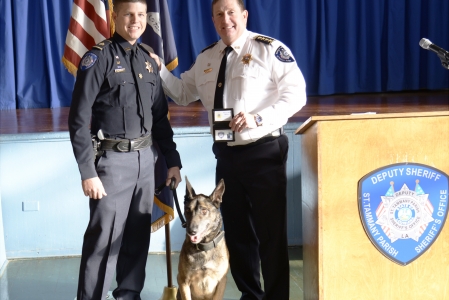 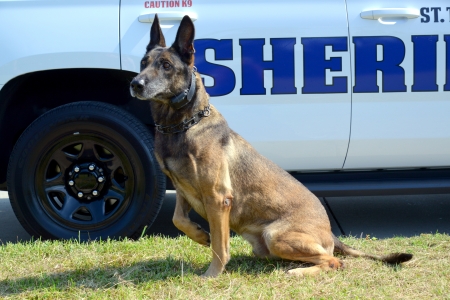 During his eight years with the STPSO, K9 Deputy Thor located many articles of evidence, including guns, other dangerous weapons, narcotics and stolen property, which had been hidden by the fleeing criminals, often times in heavily wooden areas.

He conducted 46 tracks and physically located 20 suspects. This accounts for a 43 percent success rate, which is far above the national average rate of 20 percent.

K9 Deputy Thor also conducted numerous demonstrations in the community and in local schools to familiarize residents and students with the role canines serve in law enforcement and particularly with the St. Tammany Parish Sheriff’s Office.

In 2014, K9 Thor located and apprehended the “Spider Man” burglar who attempted to drown him.

In 2015, he saved the lives of deputies resulting in him being stabbed in the neck with a knife, sustaining significant injuries. His heroic actions during those incident earned him national recognition and a day named in his honor.  The late Pat Brister, the parish president, named October 23, 2015 as Deputy Thor Day, during a rally held in his honor.

He was awarded a Medal of Valor through North American Police Work Dog Association.

K9 Deputy Thor, a Belgian Malinois, is being retired due to age and health issues. He will spend his retirement in the care of his handler, Sgt. Ronald Olivier.

“K9 Thor has had a very impressive career here in St. Tammany, and we owe him our thanks and gratitude,” Sheriff Randy Smith said. “I wish him a long and well-deserved retirement.”

K9 Deputy Thor is being replaced by K9 Deputy Axel, an eight-month-old Belgian Malinois which was purchased by the St. Tammany Parish Sheriff’s Office earlier this year.