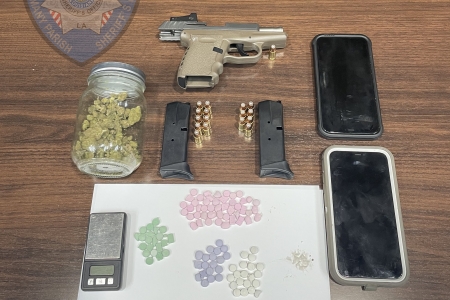 Illegal drugs and a firearm were recovered during a traffic stop Sunday (March 20) afternoon near Lacombe.

At approximately 8:30 p.m. Sunday, a St. Tammany Parish Sheriff’s deputy stopped a silver 2019 Nissan Pathfinder, which was traveling westbound on U.S. Highway 190 in Lacombe, after observing the driver commit a traffic infraction.

While conducting the traffic stop, the deputy observed the driver and a passenger in the vehicle acting suspiciously. He also observed what was determined to be an illegally possessed firearm inside the vehicle.

A subsequent search of the vehicle located 162 MDMA (Ecstasy) tablets,15.5 grams of marijuana, a scale and other drug paraphernalia in a backpack on the back seat of the vehicle.

“Once again I applaud this deputy, whose training and proactive policing resulted in illegal narcotics being taken off our streets,” Sheriff Randy Smith said. “The St. Tammany Parish Sheriff’s Office continues to send the message that we will not tolerate individuals bringing drugs into our community.”