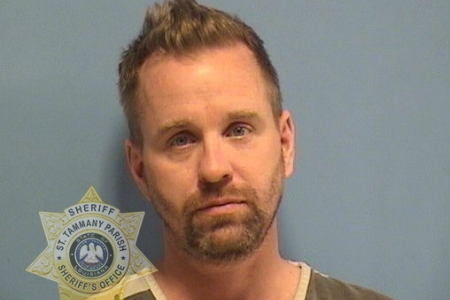 The St. Tammany Parish Sheriff’s Office has arrested a Florida man after he kidnapped his girlfriend at knifepoint and drove her from Largo, Florida to Covington.

A concerned motorist called 911 Sunday afternoon after she observed a woman who appeared to be in distress, riding in the backseat of a vehicle, which was traveling on Highway 190 in Covington. Shortly thereafter, deputies received a call from the woman herself, who reported she had climbed out of the window of the vehicle and fled after her boyfriend threatened to “kill her and dump her body on some dead-end street.”

The victim told deputies her and her boyfriend, Jay Langford, had been staying at a residence off Highway 1078 in Covington since they arrived in the area on Sept. 12. She said he brought her to the residence after he kidnapped her from her home in Florida on Sept. 11, and on Sept. 18, he began beating and threatening her.

While en route to the residence Sunday afternoon, deputies observed Langford driving on Highway 1078. When Langford saw the patrol car, he sped off. Following a brief, high-speed pursuit, Langford was taken into custody.

He was booked into the St. Tammany Parish Jail on one count each of Domestic Abuse Battery, Simple Assault (Domestic), Possession of Schedule V (Xanax) and Aggravated Flight from an Officer.