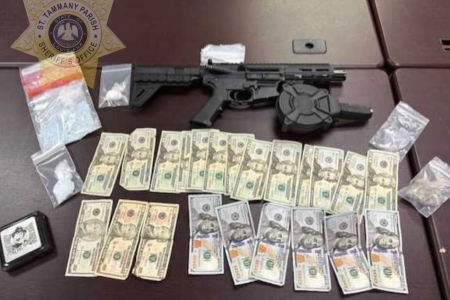 After St. Tammany Parish Sheriff’s detectives located fentanyl-laced marijuana during a traffic stop, Sheriff Randy Smith is reiterating his warning to residents the only safe drugs are those prescribed by a doctor or purchased at a pharmacy.

At approximately 8:30 p.m. Friday, STPSO Narcotics detectives were patrolling the area of the Abita Nursery Subdivision in Covington when they observed a purple Dodge Challenger driving erratically through the neighborhood and initiated a traffic stop.

The driver of the Challenger continued driving for approximately three and a half blocks before finally stopping, at which time, the driver, 43-year-old John Silas Joiner of Mandeville, struggled with detectives before ultimately being taken into custody and being placed in the rear seat of a patrol car.

When emergency medical personnel open the door of the patrol car to evaluate Silas, he fled and led the detectives and a patrol deputy on a foot pursuit through the neighborhood. He was recaptured a short time later and transported to the Saint Tammany Parish Correctional Center without further incident.

Detectives located approximately 7.5 grams of suspected marijuana which tested positive for both marijuana and Fentanyl and 11 tablets of suspected MDMA (Ecstasy) in Silas’ possession.

Joiner, who is currently on parole in this state for distribution of cocaine, morphine, and hydrocodone and illegal possession of a firearm by a convicted felon, was booked into the St. Tammany Parish Correctional Center on the following charges:

“Fentanyl is a very dangerous drug and it is no secret that it is in our community,” Sheriff Smith said. “When you purchase drugs, even marijuana, off the street, you do not know truly what you are getting, and even a small trace of fentanyl can be deadly. The only safe drugs are those that are purchased from a pharmacy and used as prescribed by a doctor.”