Deputies save two lives in one day during busy weekend 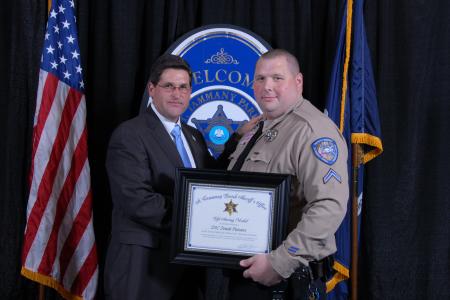 DFC Donald Plaisance is pictured with Sheriff Jack Strain after receiving our Life Saving Award in 2012.  During that incident (on Christmas morning, 2011) DFC Plaisance performed CPR on a man who had no vital signs and resuscitated him.

The actions of several St. Tammany Parish Sheriff’s deputies resulted in two lives being saved Saturday, including one that was just beginning.

At approximately 6:45 p.m. Saturday evening, Deputy First Class Donald A. Plaisance, Jr. and new recruit Deputy Bryce Morse, who has been in the patrol division for less than a week, were dispatched to a medical emergency on Slemmer Road in Covington.

When they arrived at the residence, DFC Plaisance came into contact with an unidentified female who pointed to a car and stated, “She’s in there.”  DFC Plaisance looked in the vehicle and observed an Hispanic female sitting in the front passenger seat of a small vehicle with her left foot propped up on the dashboard.  DFC Plaisance observed a baby’s head lying on the seat between the legs of the female.  The baby was not moving or making a sound.

It was learned the mother had no prior prenatal care and was unsure as to length of the pregnancy.  DFC Plaisance, while speaking through the translator, reached for the baby’s head attempting to clear the airway with a chin lift.  DFC Plaisance observed the umbilical cord to be wrapped around the baby’s neck.  He used his fingers to unwrap the umbilical cord, clearing the baby’s airway and an immediate cry was heard.

With the cord removed from the neck, DFC Plaisance supported the baby’s head, planning to wait for EMS.  However, the motion of supporting the head caused the child to be lifted up and the baby to deliver from the mother’s body into DFC Plaisance’s hands.  He observed the child was a baby boy and the child again began to cry.  DFC Plaisance held the crying child as members of Fire District 12 arrived with blankets to wrap the child.  He then maintained care of the child due to the umbilical cord still being connected to the mother.

Paramedics arrived on scene and cut the umbilical cord.  The mother and baby were both transported to Lakeview Regional Medical Center for further care.

DFC Plaisance went to the hospital Sunday to check on the status of the mother and her new baby.  He was able to meet with the mother and was relieved to learn she and the baby were both doing quite well.

“Every day men and women in law enforcement make lifesaving decisions.  However, it is not very often that one of us is blessed with the opportunity to help bring a new life into the world.  We are incredibly grateful that this woman and her baby are going to be okay.  That we were able to be a part of this child’s birth is a wonderful early Christmas gift for us as an agency and we wish them the very best during their first holiday season together,” said Sheriff Jack Strain.

A few hours later, deputies and medical personnel in the jail rendered lifesaving medical assistance to an unresponsive female inmate.

At approximately 11:30 Saturday night, an inmate in the female holding (booking) area woke when another inmate next to her moved against her and had made a strange noise.  Both ladies had been sleeping.  The first female looked at the second and noticed that she seemed unresponsive.

The first woman alerted deputies, who immediately came to the cell and checked for vital signs.  Finding none, emergency lifesaving measures were initiated at that moment, including CPR and resuscitation through the use of an A.E.D. (automated external defibrillator).  During this time, medical personnel from the jail were attending to the woman along with the on-duty deputies.

The deputies’ unwavering efforts to save the woman’s life led to her pulse being restored, though she continued to require assistance breathing.  Acadian Ambulance and Fire District personnel arrived a few minutes later and transported the woman to a local hospital, where she remains under treatment and evaluation.

When the woman was brought into the jail Saturday, her medical screen revealed no issues and her drug screen results were negative.  She was originally booked for an outstanding warrant for failure to appear in court.  She has since been released from the jail on a medical bond.

“I am extremely proud of our deputies’ efforts to save this woman’s life.  Without their immediate intervention, she would almost certainly have died.  Fortunately, their training and their instant actions combined to restore her heartbeat and give E.M.S. personnel time to get her into emergency care at the hospital,” Sheriff Jack Strain said.