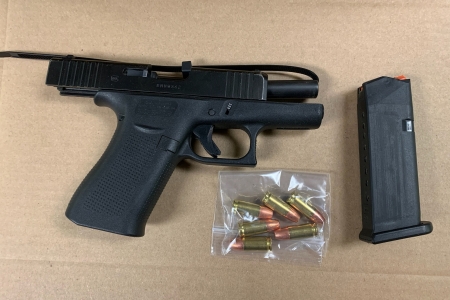 An anonymous tip was received that there was narcotic activity at a residence on 29th Avenue in Covington. Detectives responded to the residence and knocked on the door in order to investigate. While Detectives were outside of that residence, a drug transaction was observed between a subject on foot and a vehicle stopped on 29th Avenue. Detectives identified themselves and attempted to detain the subject on foot and the vehicle in question. However, the vehicle and subject fled from the detectives. Detectives were able to successfully detain the subject on foot. He was identified as 20-year-old, Alvin Laurent, who was found to be in possession of illegal narcotics and a stolen firearm.

Sheriff Randy Smith wants to remind citizens that when you call the agency’s hotline, 1 (800) 462-5245, we look into all of the tips. “It has worked for years and we will continue to be vigilant with taking drugs and illegally possessed weapons off the street of St. Tammany. No matter where it is in the parish, our detectives will investigate and make the appropriate arrests when crimes are being committed,” Sheriff Smith said.