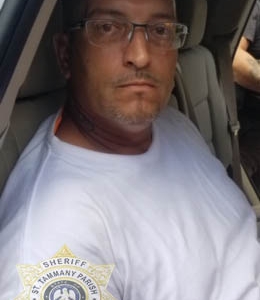 A Slidell-area man was arrested on warrants for rape following an incident involving a 9-year-old child.

A Slidell-area woman contacted the St. Tammany Parish Sheriff’s Office Wednesday night (July 10) after she came home and found her husband, Glenn Mills Jr. (DOB 8/23/1977), actively involved in a sexual act with a 9-year-old girl that was left in his care.

When confronted by his wife, Mills fled the residence in his pickup truck prior to deputies’ arrival.

A St. Tammany Parish Sheriff’s deputy assigned to the U.S. Marshals Fugitive Task Force located Mills shortly before 1 p.m. Thursday afternoon at a residence off 2nd Avenue in Harvey, La. He was taken into custody without incident and booked into the Jefferson Parish Correctional Center as a fugitive out of St. Tammany Parish.