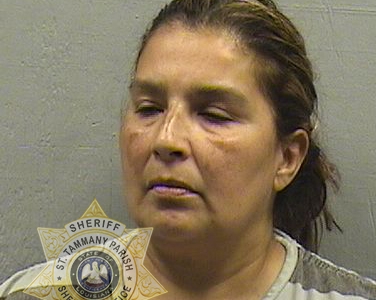 St. Tammany Parish Sheriff’s detectives concluded a nearly two-year-long case with the arrest of a Chalmette woman for exploiting an 85-year-old Slidell resident.

With the cooperation of the St. Bernard Parish Sheriff’s Office, Bernardita Voss (DOB 8/13/1966) of Chalmette was picked up Wednesday (May 23) at her residence in Chalmette.

She was booked in St. Bernard Parish as a fugitive out of St. Tammany and was subsequently interviewed and arrested Thursday (May 24). At which time, she was booked into the St. Tammany Parish Jail for LRS 14:93.4 Exploitation of the Infirmed.

The St. Tammany Parish Sheriff’s Office was originally contacted by the victim’s son in late 2016 after he suspected his mother’s sitter was making unauthorized transactions from the elderly woman’s personal bank account.  Detectives began the time consuming process of obtaining and sifting through piles of financial records and hours of surveillance video from multiple merchant locations to establish the probable cause necessary to positively identify Voss as the sole individual responsible for this crime.

The investigation revealed that Voss had indeed made numerous unauthorized transactions, and when questioned Thursday, she confessed to committing theft of more than $14,000 in unauthorized charges between March 2016 to December 2016.

“I applaud the relentless and persistent work of our detectives who handled this case,” Sheriff Randy Smith. “This type of case exemplifies the hard work, dedication and determination that the detectives in our Financial Crimes Division display on a daily basis.”