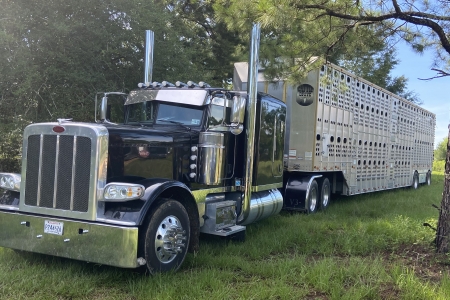 Shortly after 6:30 a.m. Thursday one of the owners of a local cattle farm called the St. Tammany Parish Sheriff’s Office to report that his Peterbilt 18-wheeler and his attached cattle trailer had been stolen from his property on Highway 1082 (Old Military Road) north of Covington.

Working with the owner, STPSO deputies were able to locate the truck and trailer shortly after 9 a.m. Thursday on a piece of property off Pat O’Brien Road.

When deputies arrived, Travis Wade Cazaux (DOB 4/18/88), was in the process of trying to leave that location with the truck and trailer. He was taken into custody without incident.

“I want to send kudos to our deputies, who in working with the owner, were able to quickly locate this stolen truck and trailer and make an arrest before the thief could even leave the area,” Sheriff Randy Smith said.