Arrest Made After STPSO Deputies Respond to Report of Gunshots 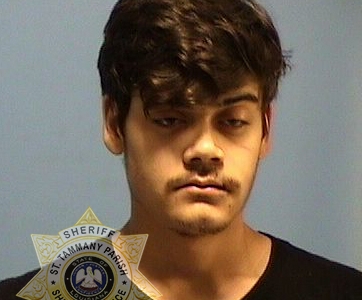 An 18-year-old Abita Springs man has been arrested after St. Tammany Parish Sheriff’s deputies responded to shots being fired in a Covington-area neighborhood Wednesday afternoon (June 5).

Shortly before 12:30 p.m. Wednesday, St. Tammany Parish Sheriff’s deputies were dispatched to the area of Slemmer Road south of Covington in response to a fight involving multiple subjects and gunshots being heard.

It was learned that a group of individuals had gathered in the area to fight and at some point one of the individuals, Andrew Graves (DOB 6/13/2000), brandished a pistol. Before fleeing the area, witnesses told deputies, Graves fired the pistol multiple times, but no was struck.

Graves was located by STPSO deputies later that afternoon and taken into custody. While in custody and being transported, Graves caused damage to the interior rear door of a patrol unit.

He was booked into the St. Tammany Parish Jail on the following charges:

Deputies located and recovered the firearm Graves previously discarded while fleeing the area.