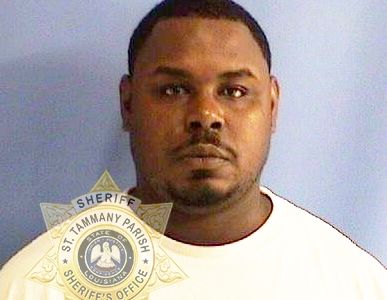 A Covington-area man is behind bars after he attempted to run over an off-duty St. Tammany Parish Sheriff’s reserve deputy following a hit-and-run incident Wednesday (Feb. 21) afternoon.

The reserve deputy was driving his personal pickup truck and was stopped on Penn Mill Road at the intersection of U.S. Highway 190 near Covington shortly before 2:30 p.m., when he observed a white 2009 Pontiac G6 driving westbound on U.S. 190. As the Pontiac approached the intersection at Penn Mill Road, it struck the off-duty reserve officer’s truck before swerving back onto the highway and continuing westbound on U.S. 190.

The reserve officer proceeded onto the highway and followed the Pontiac westbound while calling 911 to request marked units. The vehicle continued to drive erratically westbound on U.S. 190, before turning northbound onto Louisiana Highway 1077. The suspect turned into a subdivision and made a U-turn.  At this time, the reserve deputy exited his truck, identified himself as law enforcement and ordered the vehicle to stop.

The driver of the Pontiac did not obey the deputy’s commands to stop and instead accelerated his vehicle in the direction of where the off-duty reserve deputy was standing, in an apparent attempt to run over the deputy.

Fearing for his safety, the reserve deputy discharged his off-duty weapon at the suspect in an attempt to prevent him from hitting the deputy with the vehicle.  The deputy was then able to avoid being struck by the vehicle, which continued southbound on La. 1077.

Marked units from Covington Police Department arrived on scene and were able to apprehend the driver, Christopher Townsend (DOB 12/29/1985; 70046 6th Street, Covington) after his vehicle was disabled southbound on La. 1077 due to damage sustained in the initial hit-and-run crash.

Townsend failed a field sobriety test given on scene, but refused to submit to a breathalyzer. Blood was drawn and will be sent for analysis.

No one was injured in the incident.

Townsend has an extensive criminal history out of Texas, including arrests for aggravated assault with a deadly weapon, theft, burglary, assault of a family member, evading arrest, failure to identify, driving while intoxicated, driving under suspension and drug charges.