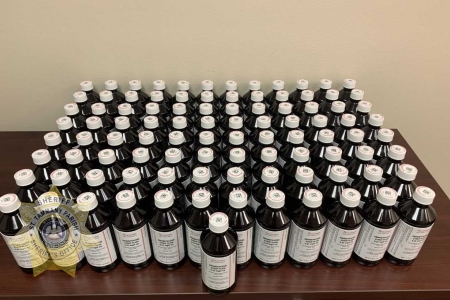 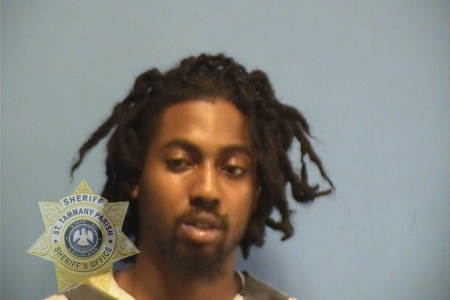 The St. Tammany Parish Sheriff’s Office has made an arrest after 97 bottles of illegally obtained “cough syrup” was found during a stop on Interstate 12.

At approximately 11 p.m. Monday (May 16), two vehicles traveling together eastbound on I-12 near Covington were stopped by detectives with the STPSO Highway Enforcement Unit after they were observed committing various traffic infractions.

The occupants of the first vehicle, a black Mercedes C300, told the detectives they were on their way from Houston to Covington to go to court for a previous arrest.   Donta Evans of Houston, Texas, and Domanique Gasaway of Galveston, Texas, were arrested on narcotics distribution charges in that same vehicle during a traffic stop on April 6.

A consensual search of the Mercedes sedan on Monday yielded negative results for illegal narcotics this time.  Evans was subsequently issued a citation for Following Too Close and No Driver’s License, and both he and Gasaway were released.

Meanwhile, the driver of the second vehicle, a Chevrolet Cruze, which is also registered to Gasaway, refused to provide consent to search that vehicle.  K-9 Echo was called to the scene and alerted to the odor of narcotics inside the vehicle.

A subsequent search of the vehicle was conducted, resulting in the discovery of 97 bottles (1 pint each) of Promethazine Hydrochloride syrup.

The driver of the Chevrolet Cruze, Colin Walthall (DOB 07-01-97) of Houston, was placed under arrest. He was issued summons for Speeding, Improper Lane Use and Possession with Intent to Distribute a Legend Drug without a Prescription.

Walthall also had an outstanding warrant through the Tangipahoa Parish Sheriff’s Office for Failure to Appear for prior drug offenses.  He was transported to the St. Tammany Parish Correctional Center, where he was booked as a fugitive.