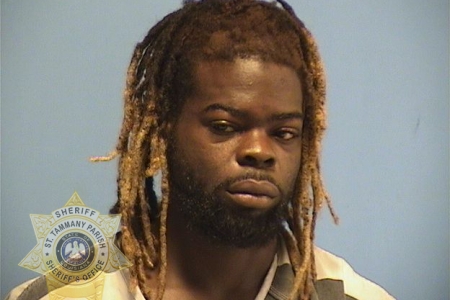 The arrest of a Slidell-area man has cleared 17 vehicle burglary cases in the east St. Tammany.

On May 1, detectives with the St. Tammany Parish Sheriff’s Property Crimes Division responded to an address in the Kingspoint Subdivision near Slidell after being notified by members of the STPSO Patrol Division they had information on the location of a laptop computer that was reported stolen the previous night in a vehicle burglary.

Detectives executed a search warrant at the residence where the laptop was known to be and discovered numerous additional items suspected of being stolen, prompting a two-week-long investigation.

Additional victims were identified, and Gary Hansome (DOB 2/8/1994) was ultimately booked into the St. Tammany Parish Correctional Center on 17 counts of Burglary and one count of Theft Under $1,000. The theft charge comes from a shoplifting case at a local business.

The known vehicle burglaries go back to December 2021 and occurred in the Kingspoint Subdivision near Slidell and the Cherrywood Subdivisions near Pearl River.

Although the owners of most of the stolen property have been identified, detectives are still trying to find the owners of some unclaimed items.

Anyone that may have been the victim of a vehicle burglary in the Kingspoint or Cherrywood Subdivisions is asked to contact Detective Mike Kim at (985) 276-1325 or STPSO Central Dispatch at (985) 898-2338.