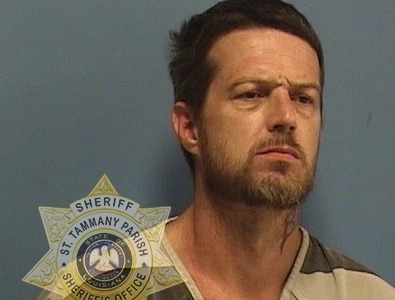 An Abita Springs-area man was arrested last week on animal cruelty charges after St. Tammany Parish Sheriff’s deputies observed a malnourished dog and her puppies at a residence on McIntyre Road.

Deputies were responding to a “keep the peace” call Thursday (July 29) at a residence in the 74000 block of McIntyre Road near Abita Springs in reference to a property dispute among family members, when they observed a female pit bull and her two puppies.

The dogs were malnourished and emaciated. The mother and at least one of the puppies appeared to be suffering from a case of mange, and the mother had open wounds and sores.  There was no water nor food provided for the dogs, and the heat index at the time exceeded 108 degrees.

The owner of the dogs, William McIntyre (DOB 3/8/1978), admitted to having not sought veterinary care for the mother in over a year and never for the puppies.

Sheriff Smith would like to remind everyone that as temperatures continue to remain high in South Louisiana to make sure that you provide adequate water and shade for your pets.

“Our pets cannot tell us when they are hurting or when they are thirsty,” Sheriff Smith said. “They rely on us to care for them, and in this case this man failed to provide the bare minimum of care for these dogs. I thank the deputies for being observant and making sure the dogs were ultimately cared for appropriately.”